Presentation
of the PEDIAC program

Presentation of the PEDIAC project

Since 2019, the National Cancer Institute coordinated a “ Task Force“, composed of patient representatives from the  Grandir sans cancer,  Gravir and  Unapecle initiatives, which led to a call for proposals to constitute a research consortium with different disciplines and skills around the theme of the origins and causes of pediatric cancers.

The consortium  is led by the Inserm (the scientific coordinator is Thomas Mercher and the project manager is Mélanie Var) and develop  a 4-year research program.

This innovative ‘middle out’ approach of funding has already created new scientific interactions between teams that had not, for some, worked together before and crossed thematic boundaries expanding the scale and scope of the project beyond conventional methodology.

Several institutions and teams in the project have initiated and contributed to other national and international studies on pediatric cancers,  including CONECT-AML , MAPPYACTS, MICCHADO, RNCE CCOP, CLIC, I4C. These studies serve as  strong foundations for the current project.

Within this framework, the project was developed based on the following ideas:
– to develop an ambitious and sufficiently broad scientific proposal that will benefit from the wide expertise of selected teams.
– to consider that teams were selected to contribute to this project in a balanced manner, both scientifically and budget-wise.
– to consider the strengths of selected teams and allow for the best valorization of the expertise and tools already available within the selected teams and in the context of national and international studies.
– to generate data that will be integrated within already existing or recently funded databases to maximize the potential to obtain statistically significiant results on rare cancer entities.

Current data indicate that approximately 2500 children and adolescents are affected by cancer every year in France. Among the most common cancer pathologies in children are leukemia, central nervous system cancers and lymphoma. Scientific and medical advances have allowed to achieve an average of 80% survival rate for children and adolescents with cancer (1, 2). However, this number hides an important heterogeneity in the response of different cancer subtypes to treatments with several of them being associated with a very poor prognosis including acute myeloid leukemia (AML), sarcoma and high-risk neuroblastoma (NB).

Together, cancers remain the leading cause of death by disease in children over 1 year of age. Moreover, most children cured of their cancer suffer from deleterious secondary effects related to the disease and the treatments received. Therefore, a better understanding of the preventable causes and of the mechanisms underlying pediatric cancers development are required to significantly reduce the impact of cancer of children. Clinical observations and more recent exhaustive genetic characterizations have already established that the spectrum of pediatric and adult cancers is significantly different. A striking example is that genetic alterations generally acquired during aging are rarely observed in pediatric cancers. These observations indicate that the mechanisms at play during pediatric tumorigenesis present specificities compared to those observed in adults. These differences may result from exposures to different agents during development/early life as compared to adults or to a differential permissiveness of the cellular and molecular components to transformation by pediatric-specific oncogenes at different stages of ontogeny.

The overall goal of the project is centered around deciphering the mechanisms controlling the particular permissiveness and specificities of childhood to the development of pediatric cancers associated with poor prognosis . Our approach will be to exploit the existing epidemiological or genetic data to further identify risk factors, to generate new data using appropriate models allowing to characterize the importance and specificities of different developmental stages, to decipher the molecular mechanisms that control specific tumor cell initiation and maintenance and to improve modeling strategies to include the contribution of the tumor environment. The project has been divided into 3 work packages (WP) that are schematized and detailed below. 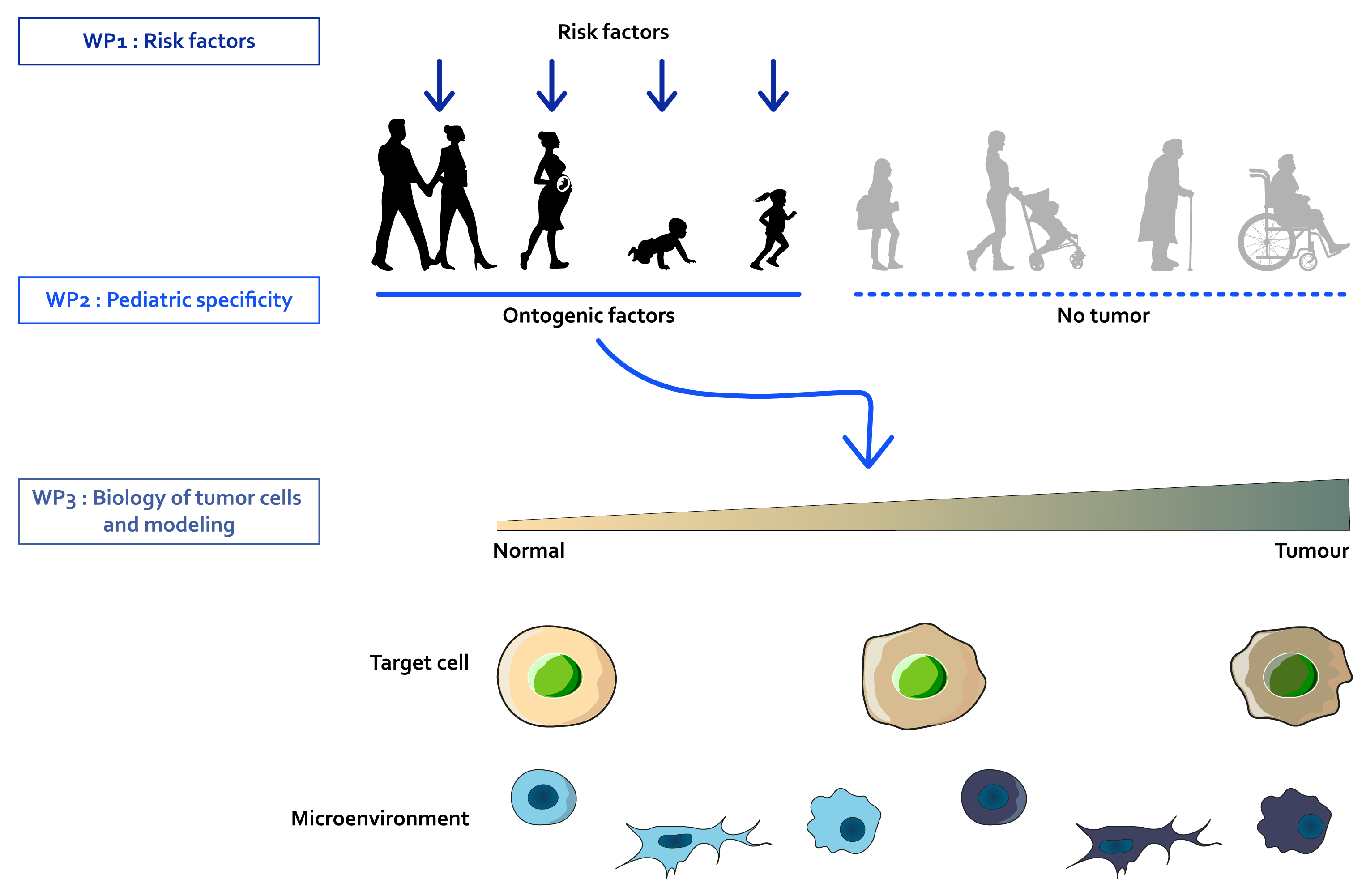 1- Identifying genetic predispositions by relying on existing cohorts of patients considered to be more likely to carry germline mutations.

3- Estimating the attribuable fractions of modifiable and non-modifiable risk factors in France. 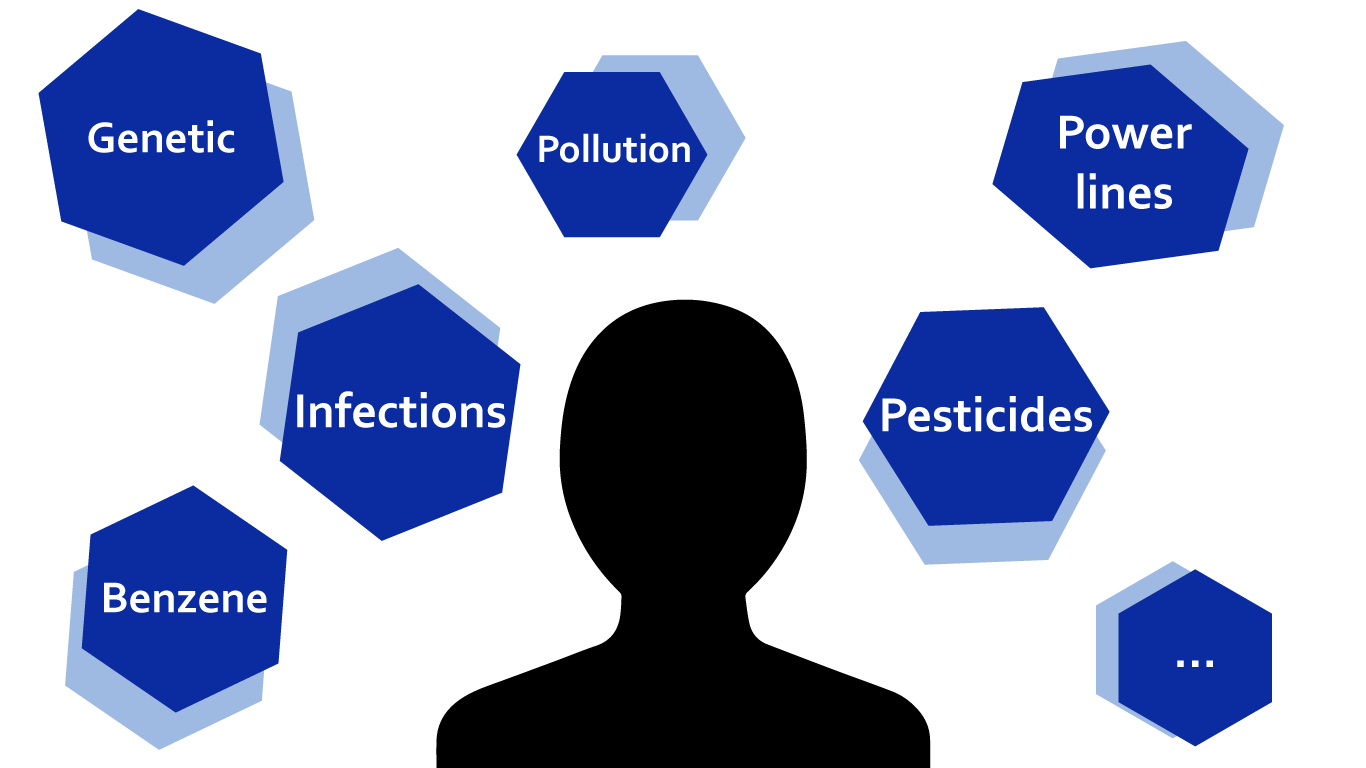 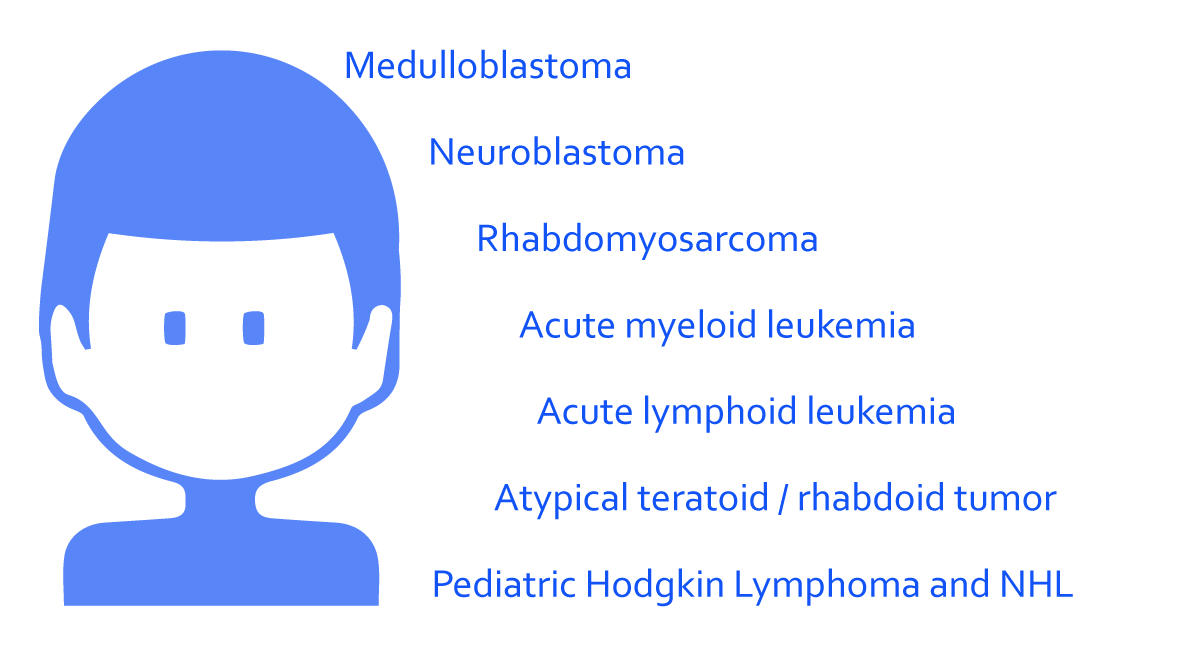 1- Characterizing pediatric cancer entities through available and novel data to decipher cellular and molecular differences within intra and extra-tumoral compartments.

3- Developing modeling approaches to reconstruct more complex of tumor ecosystems and better model the importance of interactions between target cells and their microenvironment during cancer developments.

The data generated in the project will also feed into national and international databases in order to allow the global analysis of the information obtained on rare cancers. For example, the recently funded databases to improve the collection and sharing of clinical and research data on pediatric cancers include DOREMy (database for clinical and biological data for integrated research and clinical practice for pediatric acute myeloid leukemia) and SHARE-4KIDS (multi-omic transversal database in pediatric oncology).